The workshops are at the heart of this intercultural educational Project. Following the sway of the Atlantic Ocean in the historical musical waves between Africa and Mexico we played with children and youth forming a musical dialogue between Mali and the Black coast of Oaxaca. We carried out three workshops with male and female children and youth from Santiago Llano Grande, la Banda, and with professional musicians from Mali and different areas of Mexico. We were in search of fine sounds that gave new life to the musical tradition in this Oaxacan coastal Black population.

Distributing instruments and repertoires from local traditions, a pot, la charrasca, la guacharasca, el cajón, la tarimba, violins, guitars and the bajo quinto (see the description in this section). This was facilitated by the children prior familiarity with local genres such la chilena, el merequetengue, and the son de artesa. In this way a dialogue with Mali musicians began. The two musicians, members of the trio Da Kali, Lassana Diabaté playing on the balafón – an ancestral instrument to the marimba – and singer Hawa Kasse Mady Diabaté were brought over to Mexico by Lucy Duran, specialist in the music from sub sarahran Africa.Read more

The re creation of the traditional music of the Black populations from the coast of Oaxaca and Mali can be exemplified with the pieces that illustrate well the musical dialogue between these two cultures. The song OaxacaO is a creation that takes its melody from the responsorial Mande song Jokori Jokori sung in Spanish. It alludes to the recognition of the afromexican culture as part of the Mexican nation. Inversely the son Entrada is taken from the emblematic Danza de Diablos (Devil Dance) as the harmonic base for the melody Mandé called Angatá (listen to the audios from the workshops in this section).

The project also endeavored to reintroduce and strengthen the presence of musical instruments that had once existed but had since disappeared and those that are now scarce in the region such as the violin, bajo quinto and tarimba. A luthier workshop was carried out to teach how to make local instruments such as the devil pot (bote del Diablo), cajón and tarimba.

Diverse methods were used for the teaching-learning process of music according to the characteristics of each instrument and the pedagogical experience of the teachers. We experimented on an ad hoc basis with the musical scores of local repertoires in a didactic fashion along with the teachers, (those that can use these are welcome to consult this section).

Three workshops of three hours daily sessions were carried out for two and a half weeks closing each workshop with a public concert in the local town.

During our first workshop in Llano Grande we worked with the local and Malian repertoire. The music practiced was the Chilena Silencio corazón, el Son del Verso de la Danza de diablos, and the pieces Nana Tribán, Duga, and OaxacaO were composed. These have Malian melodies (listen to the melodies of the two workshops in this section) and they were presented in public concerts in the town at the close of the workshops. Workshops laudería took place during which two botes del diablo, two cajones percutores and two tarimbas or monocordios were constructed. We also donated a balafón to the cultural center of Llano Grande where the youth and children could practice after they were initiated on this Malian instrument during the workshop.

The second workshop was organized with Mexican teachers and we decided to only work with the local repertoire on this occasion (see video clip of the workshop ensemble with la chilena “Silencio Corazón”). We also continued with the laudería workshop putting the skin drums or boxes. Following the first workshop word had spread among the town and about 30 children and youth arrived for this workshop. The workshop of violin and guitar were consequently full. On this occasion we brought two Bajos quintos to the workshop that were subsequently donated to the cultural center but were actually under the responsibility of those who were learning this instrument so they could continue to practice. The two youth who learnt this instrument were particularly able and learnt the bajo quinto quickly (see the video clip of the workshop of the bajo quinto in this section). They were very enthusiastic and proud to know that for the first time in 50 years the bajo quinto was played again on the coast. Heretofore this instrument had been replaced by the guitar and consequently no one had been able to play the bajo quinto. It was an emotional experience for us all to know that we had grown the seed of this music once again thus reviving this instrument among this population.

During this workshop we proposed to work with the children who had learnt the instrument to make a disc of the repertoire learnt during workshops 1 and 2 including the new songs from Mali. We were privileged to be able to prepare the repertoire for a recording of the disc along with Malian balafon player Lassana Diabate singer Hawa Kasse Mady Diabaté, professionals members of the Trio Da Kali (see videos of the Trio Da Kali on Youtube).

We worked intensively under the artistic expert and director Lucy Durán, experienced in the production of graphic recordings of discs. The children made an impressive effort to meet the musical demands of this professional objective. (listen to the sound tracks in the section titles: “Disc”). 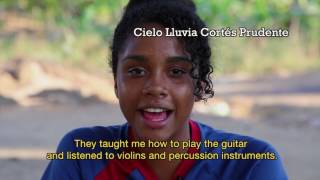 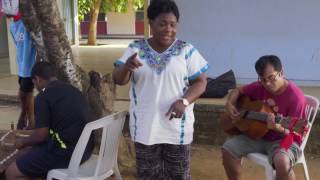 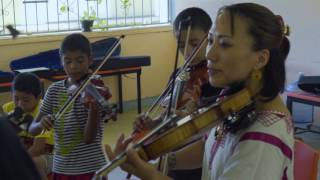 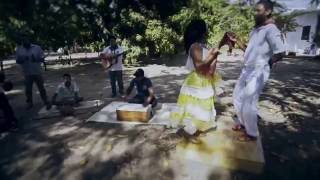 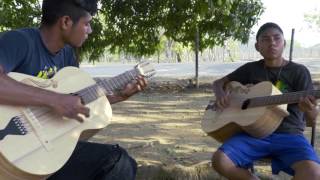 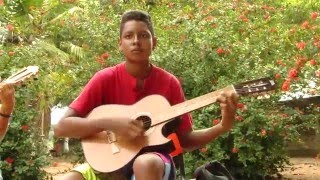 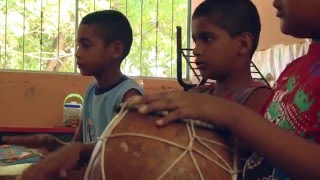 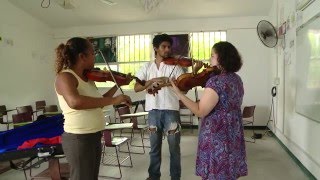 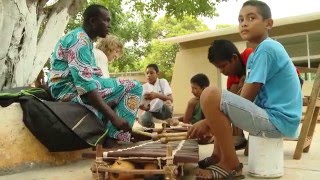